Of Dreams That Come True...

May 22, 2019
I didn't think I would be writing this so soon. I assumed I'd wait till later this year to write this post but one sleepless night changed my mind. I reminded myself that the best time to do almost anything is NOW. So, here goes nothing. Scratch that, here goes SOMETHING 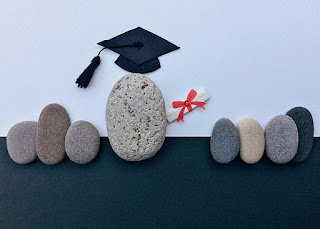 I AM A GRADUATE! A FIRST CLASS GRADUATE!

I still have to remind myself occasionally that no, it's not just a semester result. It is the accumulation of all my GPs and CGPAs. It's surreal. And yes, it is a dream come true. Not a big deal these days but it feels good achieving what I had been working on.

If you think I seem shocked and surprised, then trust me, I am. Why? So many reasons but the single most important one is that graduating with a first class is something I only started working towards in my final year
Weird, I know. I thought so too but I did what I had to and I'm super grateful that God made it happen.
If you're already wondering why I only started working towards it in my final year, here's a little backstory
Contrary to popular opinion, I didn't start out hoping or wishing to graduate with a first class. Believe me when I say the thought never crossed my mind. I was probably only interested in having good enough grades and I did just that. When I saw my very first GP (4.16/5.00) , I thought oh well, not bad. Of course, the fact that it could have been way better if I didn't have to take annoying Maths and Physics courses wasn't lost on me (I don't like them). Imagine having all A's and B's and then good old Physics rears up its ugly head. I've alwaysss detested those subjects and I wasn't about to fall in love with them in the university. Yet, I was grateful. An older colleague I was friends with actually told me then that I could make a first class. He even gave me tips on how to improve and I'm sure I was rolling my eyes then.
I wasn't interested plus I didn't even think it was possible. If I even thought it was possible, all hopes would have been dashed when I had a lower GP in second semester. That happens to be my lowest throughout my uni journey and it definitely affected a lot. Funny how I remember where I was when I saw that result and how disappointed I was. Not because I was gunning for a first class but because it just didn't make sense to me. Of course, another of those courses did its thing. This time, it was maths (kill me now! Haha). I was still grateful though. First because I knew how staggering the stats of those who had to rewrite these courses was.
Second because of one 'university course' I was scared of failing. Not because it was difficult but because I fell sick and I had to miss the test. I had to write an unplanned letter under very few minutes! Digressing but I like to think that was only preparing me for my final year, where I was the general secretary of my department's association and I had to write lots and lots of letters. I think I aced that letter for a first year student. I still saw a copy during my packing series and it didn't make me cringe so that counts for something. I had to convince the lecturer in charge that I was indeed sick and then appeal to him to either let me take another test or grade my exam over 100% instead of 70%. It was quite tasking because I had to do a lot of follow-up and so on. Thank God for resilience. I remember the lecturer asking what my GP was and on hearing it, he said something about how I must be serious and so he will help me. Apparently, I wasn't the only one who missed the test but my GP probably made way for me. I however have no way of knowing whether he did grade me over 100 or 70. I had a C in the course and I was extremely grateful. At the end of my first year, I had a 4.03 CGPA.

Fast forward to my third year when I had a 4.91/5.00 and 5.00/5.00 in first and second semesters respectively. I was in awe and even though I wasn't freaked about graduating with a first class, I was sooo close and I thought, well why not. I mean, let it not be said that I didn't try. I would probably regret graduating with a 4.49 if I did so just because I did not try. If I tried and it ended up that way, fine (not fine actually but you get the drift).
Going by all standards, trying to move from a second class upper, no matter how strong the CGPA is, to a first class is hard. It gets even harder in final year. There's project to take your time. Really demanding courses. General tiredness. Don't get me started on how almost everyone around you already know what they'd be graduating with but you're there, trying to break boundaries. So, I gave up. Particularly in my final semester. I got soo tired and I didn't study as much as I ought to. The long union strike didn't help matters. Little secret but I was lowkey envious of my course mates who could 'chill' because after first semester's results were out, they could already see the finish line. 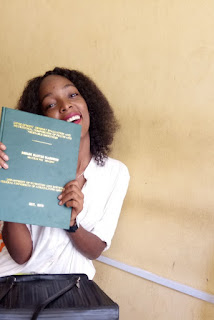 I on the other hand, not really. My first semester result had upped my CGPA to a first class but I still couldn't relax. Any silly mistake and I was back to where I was coming from. I was angry at some point, wondering why things had to be this way. Angry that I cared. Angry, angry. And oh did I make mistakes. My tiredness affected my studying pattern and so much more. I studied 'hard' quite alright but it didn't seem enough to me. I wrote some exams and I just shook my head. Lol! Truth be told? My GP for that last semester was relatively low. However, it wasn't low enough to take me off a first class. And I take no credit for that. Absolutely no credit. It was GOD! Going into further details on this would make this post too chatty and too long. So, let's keep it simple. God did it.

When I first heard the news, I couldn't believe it and I wore my doubting Thomas badge with pride. Until I heard it from the horse's mouth, so to speak. Even then, the few people I shared the news with were more excited than I was.
When the results were officially out and I did see things for myself, I was overwhelmed. It was nothing short of a miracle. Not sure if I got teary but I was an emotional wreck. It was a hard, trying to strike a balance between being super grateful and making all shades of impostor syndrome take a back seat/get out of the picture entirely. But I did it.

Beyond proving to myself that I can indeed do anything I put my mind to, with the help of God of course, it's been a delight watching how proud my parents were are.
And so, here's to dreams that come true. And most importantly, here's to the GOD who makes it happen.
Here's to many more dreams that would come true. For me, and for you.
Thanks for reading. xx