No Day is Normal!

April 05, 2016
Hey there! I'm sure you're as guilty of the 'My day was normal' reply as much as I am. Believe me, saying that is not normal. No pun intended.  (I'm actually hoping I'm not the only guilty person here). Describing my day as normal has never been disturbing until recently. No better time to write this than when I am down with malaria, cough and catarrh. I have also heard and seen different things this period that just keeps hammering the whole underrated concept of being fine and hearty.
It all started with seeing a lady get hit by a car. It was so bad that I thought I was going to pass out. Nollywood didn't prepare me for what I saw.
Not long after then, I heard about the death of two people. These people weren't sick or anything and they went, just like that. How ironic is it that we all know our date of birth and not the day we're going to die.
And then Malaria struck and not surprisingly, I found myself thinking and trying to remember what feeling fine and strong was like. Thinking about it made me realize how much I took days that went by without a glitch for granted. I realized also that I treated those days like they were my right and not a privilege. 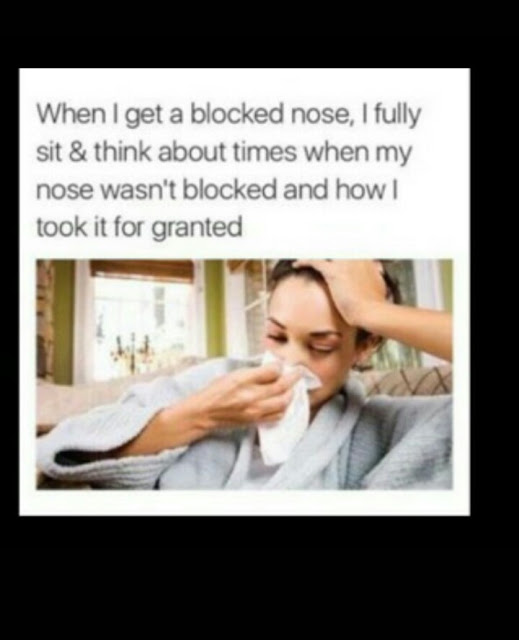 Being sick makes me understand the 'You don't know the value of what you have till you lose it' thingy better. I'll fall sick and then start wishing for the normal days and while I'm busy wishing, I'd realize those days were actually never normal. I was merely experiencing some special kind of FAVOUR and GRACE.
After I got better, I basked in the euphoria of not having aches all over and gave myself a friendly reminder not to ever take the privilege for granted. It might not be easy but I'll do it.
This is to every other person that sees being hale and hearty as normal. No day is Normal. There's just someone up there who's continually guiding you.A day will never be anymore than you make it.
Treat each day as a gift and be exceptionally thankful for days that are mundane, boring, annoying, tiring and on and on...  xxx.
Love and Care.