October 18, 2018
For some reason, I can remember the very first time I came across the term 'jet lag'. It was in the pages of a book and it stuck because the main character made her business thrive by making sure her prospective overseas business partners did not have a chance to get over their jetlag before she hit them with all her ideas and so they were often too tired to counter her words and say no to her. This 'strategy' actually worked for her all time, no way it wouldn't have stuck.
Apparently, jet lag occurs with rapid travel across time zones, resulting in a disruption between the timing of body’s "internal clock" (circadian rhythms) and that of the external physical environment. Basically, it is some sort of temporary sleep disorder that occurs after a long flight. Often characterized by confusion, lack of awareness, fatigue, insomnia, indigestion and loss of appetite, it is no surprise that the author of that book figured it would make a good natural tool to throw anyone off balance. 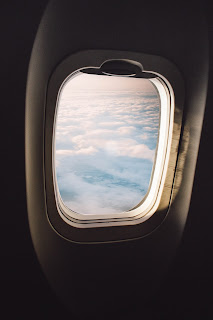 Of course, I didn't bother then to know how these poor people could have dealt better with the jet lag but it's the season of extra cheap flights to Dubai so what better time is it to get to know how to deal with jet lag than now? Let's get to how we can deal with jet lag either by reducing its symptoms or by minimizing the duration it takes for your body to adjust to the new time zone.

1. Stay hydrated- Is there really anything water cannot do? Yes, there are many things it can't do but making a jet lag more severe isn't one of them especially as our body functions better when it is hydrated. Drinking water before, after and during your flight would help counteract dehydration and so enhance good sleep. It is important to avoid alcohol, caffeine from coffee and carbonated drinks as they act as stimulants and prevent you from getting sleep, further worsening the jet lag and making it harder to deal with.

2. Turn off mobile phones and gadgets: As these gadgets give off some sort of blue spectrum light that tends to delay sleep, it is advisable to turn them off about an hour before your desired sleep time.

3. Get a good night's sleep before you fly: Either due to last minute preparation or to excitement and/or anxiety from situations like getting a cheap flight on Travelstart you're likely to not sleep well on the eve of your flight. However, it has been found that such last minute changes to your routine will only make it harder to adjust to new time zones, so you better get that sleep!

4. Set your watch to that of your destination: Definitely when you are already on the plane as you don't want to risk doing it before and miss your flight. What this does is that it makes you mentally set and in sync with the time zone of your destination. When this is sorted out, your body's internal clock definitely won't take as long in adjusting itself.

5. Move around frequently: For someone who often gets carsick while traveling, I sure know that things get better when there's a quick stop and I get to stretch my legs. Same works for flights as moving around keeps your blood flowing. This improves circulation rate and as a decreased rate of circulation is one of the most common effects of jet lag, you sure don't want to sit all through the flight so get to making good use of the free spaces in the airplane.

Fun fact: Jet lag is medically referred to as Desynchronosis. When I first came across the term, I definitely didn't think it was science related but oh well.

- Arrive Early: You would agree with me that if the business partners of the lady in that book arrived a few days prior to the meeting day, they would be more likely to have defeated the jet lag as their bodies would have had ample time to adjust its internal clock. So yeah, if you have an important meeting or event that requires a lot of mental alertness, your best bet is to arrive few days early as studies have shown that it takes a full day or more to recover from each time zone you travel through.

Have you ever been jet lagged? How did you deal with it? xx
P.s: Be sure to book flights such as this cheap flight to Dubai and bookmark this post for tips to effectively deal with the inevitable jet lag.