6 Life Lessons From My Pancake Fails! 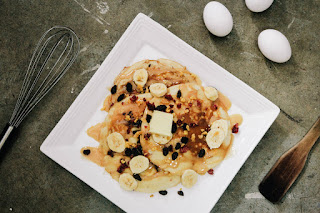 While it doesn't particularly look this cool, attractive and oh so mouth watering,(Couldn't get a decent photo of mine)  I can boldly say you wouldn't discard my recent pancakes either because of its looks or its taste. Yes! My pancake game has gotten stronger like I already said in this post. It's much of a big deal for me because of reasons I can't even explain. I'm just really excited that there's no such thing as flour, eggs, milk, sugar wastage anymore when it's time to make pancakes. In previous times, it's either I get a really awkward shape or it feels sort of rubbery and I'm all for the right/perfect shape and feel. Luckily for me, it always had a great taste but you wouldn't want to eat what doesn't look attractive now would you? I was just musing over what and what I had been doing wrong when I realised there were amazing intertwined life lessons there and I thought to share it here as I already mentioned in my September Recap that I would.

1. Sometimes it's the foundation that has been destroyed : I used to think the problem was with the frying pan I was using not knowing that everything that was wrong was with the foundation; The Batter! It was always a tad too watery. So maybe that final year course is quite simple and isn't as hard as you make it seem but you just didn't pay attention to the basics in your first year?
"If the foundation be destroyed, what can the righteous do?"

2. Don't play the blame game : Objects, people, circumstances. Stop blaming! I write this with so much guilt and I dedicate this to every frying pan I used in my pancake journey. I always transferred my anger to them. It's either it was too big or too small or it naturally gets things burnt easily. Plus I was told non-sticky frying pan is the best. I didn't have that so I was always quick to say 'It's because it's a normal frying pan not a non-sticky one'. Stop the blame game and be responsible for your actions.
"

3. Sometimes all you need is something extra : Or a little more energy. On the foundation being destroyed, remember I said it was always a tad too watery? What if I had added a little more flour? It would have probably come out well. Maybe all that the project you've been working on for a long time needs is a little more push? Maybe all you need to pass that course is that topic you feel is quite irrelevant?
"

4. Don't be satisfied with the status quo : Looking back at it now, I realise that I never changed anything about my recipe. I always made it the same way. Why? Because I was convinced the problem was with my fry pan and not me. I was very consistent with my watery batter which explains why I kept getting the same result! Maybe you need to look at that particular challenge from a whole new perspective?
"

5. Do your thing : You don't have to do it like you were taught! I kept on trying to follow to the letter, how I was taught at one catering academy I attended ; I probably missed something out. The moment I finally decided to do some tweaking here and there was when it turned out well. If how you were taught something works for you, fine but if it doesn't, feel free to add or subtract till you're satisfied! You sure want to stay true to yourself
"

6. Practice makes perfect : At the risk of sounding cliché, I had to include this. If I had let all the 'wogly' pancakes get to me and finally quit, I'd never have written this post. I kept on at it and finally discovered what works for me. In life, trials and errors are allowed!
A man who has committed a mistake and doesn't correct it is just committing another mistake.

Any more lessons you think I missed?
Huge fan of pancakes or not?
How did you learn how to make pancakes?
Did you get it perfectly the first time you tried?
Any pancake hacks for us?
What's your favourite thing about pancakes?
Leave me your thoughts and let's discuss!

I can't believe October is gradually coming to an end. The future is now, guys. Don't put off living to next week, next month, next year or next decade. The only time you're ever living is in this moment. Have an amazing week!