What the location of your Breakout says about it

May 05, 2017
I enjoy reading skincare posts a lot and so I'm always on the lookout for topics to read up on and I definitely get a lot because the internet seems to be full of lots of inquisitive people like me and thankfully many experts/dermatologists to make everything easier. When I started reading this topic up, I had no plan to publish it as a post because I didn't think I'd see much as the question came out of nowhere but there was so much to digest and read that I knew I had to share on the blog.

More than 50% of the pimples that appear on my face are always on my chin. Always. I got tired and that's what birthed the research because even after abstaining from all the 10 Beauty Mistakes that could be causing breakouts I shared last year, they kept coming back! Reading up on it definitely reduced stress for me as the location of the breakout lets me know to a high degree the exact cause and what I can do to salvage the situation instead of worrying about what mistakes I might be making / why my skincare routine isn't effective. It's also fun being able to educate those people who make it seem like you don't have any way to see your face with their constant "Ah,You have pimples" or "See your pimples" and all sort. Enough about me, let's talk about breakout location. 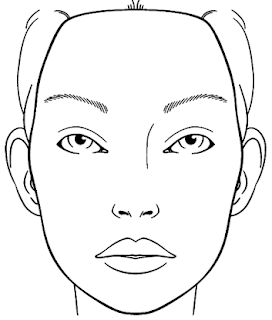 FOREHEAD : I read somewhere that zits on here are often referred to as The Third Eye, super hilarious. Dermatologists believe it's caused by stress and maybe just maybe you're going through puberty. I think it's safe to say that almost all my readers are way past that age but you never can really tell. The stress part is like so accurate even though it isn't exactly limited to causing zits on just the forehead. I honestly think the forehead is like the worst spot to have breakouts because one it's the central location of the face. Everyone gets to see it especially if it's one of those huge ones. Two because I hear that trying to burst any form of pimple there could lead to tampering with a vein or two. If that isn't scary, I don't know what is. The key here is to stay hydrated with water.

NOSE : Okay,I think having a zit on the nose is just as bad as having it on the forehead for similar reasons. Imagine trying to look down at your nose and all you see is this large mole. I've been there and it's not cool. The surface of the nose has lot of dilated pores that tend to clog easily so if you aren't exfoliating-physically with exfoilants and chemically with water-adequately, you're at risk of having a mole on your nose.

Fun fact : A day after typing this out, I got a pimple on my nose even though I had just exfoliated the day before! It made it really oily and I could only look at the bright side and say writing things actually bring them to fruition. Lol


UPPER/LOWER LIPS : So, experts say we've been eating too much greasy/acidic foods and are expected to eliminate it from the diet but how feasible is that? It could also be caused by hormonal imbalance and I totally get this because once in a while, I get a zit somewhere around my lower lip.

CHEEKS : I listed the reason(s) for the occurrence of this in my Beauty mistakes post. Dirty hands, dirty mobile devices, dirty pillow cases, dirty makeup brushes. Of course, you use all of this in other places but the cheeks happen to be the weakest link here because it comes in contact most. So, the next time you get bored and about to do a 360° around your face, remember what's at stake.

ALONG THE HAIRLINE : For me, the breakouts around here are very subtle but I sometimes see and feel them. I like to think of them as opportunistic, arising mostly after a new hairdo. Oil from haircream also adds to the tendency of the occurrence here. You can also check to make sure you wash your makeup off completely.

CHIN : You know what they say after making a list and they mentioned the last thing saying "And the last but definitely not the least"? This is what they were referring to because the chin region is definitely not the least on this list as it's my absolute favorite! Hey, it's not like I enjoy having breakouts here but I've had way too many already that finding out the reason for its occurrence gave me a really satisfying feeling. I used to notice that it came with period cramps but I thought it was just normal pms until I found out it's totally hormonal/gynecological and I wish I could have found out why the hormones choose this part of the face but either way, I think it's fair enough considering the fact that it could have opted for the forehead or the nose.

I definitely enjoyed writing this almost as much as I did while reading about it. You can check out this really informative POSTthat not only goes into details as to what part of the body controls what segment of the face, it also tells you about how the time of the day your pimple appears could be a clue to what brought about its emergence. How sweet can that be?

Where's your PRL- pimple recurring location? I totally made that up. Mine is my chin
You have a big day tomorrow and all of a sudden, a pimple appears. What are you doing to treat it? Any hacks?
Let's talk, talk and talk!
I always want to hear from you. Kindly leave me your thoughts. xx

P. S: Don't forget to share this post with people because sharing is caring. And for days when a zit pops out of nowhere, feel free to bookmark this page to know what exactly is up!
And subscribe HERE. I'm on INSTAGRAM  and TWITTER . Let's connect!