4 Cliché (Not so Cliché) Lessons From A Short Trip.

October 10, 2017
I have a love hate relationship with a lot of things and situations such as with skirts as I wrote about in this POST. I have a love hate relationship with traveling. I absolutely love to see new places, learn new things and all that but I hate the long distance that has to be traveled as a time always comes during every journey that I get claustrophobic and then there's always one or two accident scenes on the road. It's not always pretty. You'd probably think I'm talking about a 7 hours journey but No. Laugh all you want but a 3hours with almost 30 minutes journey inspired this post while I was looking out of the window at nothing in particular. I realized some lessons the journey thought me and though cliché, I thought to share it still on the blog as this act would make the lessons stick and also to reach out to someone who might need this. 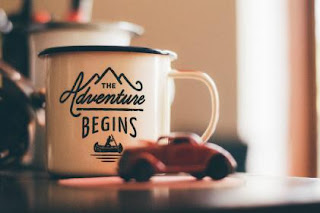 1. Inanimate objects could ruin your mood- If you let them. :  If you've ever had problems with gadgets, you'd know the most practical example here are our phones but in this case, it was a car. One that has not had problems in a very long time but decided to start jerking all of a sudden as the journey started. Frustration doesn't do justice to describing how we felt but we took solace in the fact that God definitely saved us from something terrible as it actually started jerking as soon as we hit the expressway. 😭😭😭

2. Going up a mountain is harder than coming down from it - In this case, going to our destination was wayy more difficult than returning home. Apart from the car incident, the road was even better on the returning end. So, basically sometimes in Life, it is very difficult to climb a ladder and get to whatever peak we have in mind but staying there still requires much more effort because once we begin to step down, all of the effort put in while going up becomes forfeited.

3. Things are better done in the morning : I understood clearly the importance of eating the frog (doing the seemingly most difficult task) early in the day. Though my bum still ached when we were going back home early in the morning, I'd choose the cool atmosphere and body strength over how tired it was in the evening on the day we first embarked on the journey. So be sure to eat the frog as early as possible! This is a personal message for me because I'm so not a morning person. 😔😔

4. Mothers are always right : (Sometimes). My mum kept mentioning that she feels there won't be food in the guest house that was reserved for us. Every time she brought it up, we argued that it wasn't possible. Well, we got to the guest house as late as 8pm and were shocked at the state it was in. As if that was not enough, there was no food! We actually had to start looking for another hotel that late and that proved to be an herculean task as it was a Friday night and almost all hotels had all their rooms occupied! The lesson here is to stop thinking we're all knowing and actually listen to our mums (and dads by extension) as there's every chance they are right.

And on a lighter note, I learnt that Minimie chinchin doesn't break any boredom (this is the core statement in their ads) . It only adds to headache if you already have one or gives you one especially when you're not hungry because it's quite hard and you have to expend a lot of energy while chewing it. I love it still however.


There's something about unplanned posts. For me, there's more motivation to complete them than the ones that have been planned. However, posting is simply not enough. You have to enjoy it. I hope you enjoyed this post and most importantly, I hope you were able to pick one or two lessons from it. That is the major key 🔑.
¤¤ Do you enjoy traveling? What's your favorite aspect of having to travel? Apart from the ones I stated at the beginning of this post, I love seeing the interiors of hotels. Weird much but if I suddenly have 30 billion and more in my account, hotels are one thing I'd love to invest in.

¤¤ What's the longest distance you've traveled by road? Mine is Nigeria to Ghana. That was much more fun because it was an excursion.

¤¤ What's your least favorite thing about having to travel? Packing? The long distance? The numerous police checkpoints (if it's by road). What are they?